Bill Stein can help you accomplish your goals! He has extensive experience in competition aerobatics as a competitor, contest judge, and was a member of the US. judging team at the Advanced World Aerobatic Championships in Slovenia 2002. Bill has coached many pilots to success including US national category champions, and many air show solo performers and formation teams. Bill is a FAA designated Aerobatic Competence Examiner (ACE), a FAST (Formation And Safety Training) check pilot, and he is also a former member of the ICAS ACE committee and Safety committee. Bill was a team member and instructor pilot for the Red Baron Stearman Squadron, as well as a founder and instructor pilot for the Collaborators formation airshow team. Bill has extensive experience in training in aerobatic airplanes from the classic Stearman to the amazing Edge 540.

Click here to read the details about training with Bill 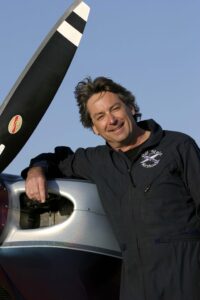 Aerobatic flight is all about exploring the full flight envelope of your airplane in all three dimensions of space. Its roots come from dogfighting in world war one when pilots were inventing tactical maneuvers to evade enemy fire or to position themselves to fire at an enemy plane. Aerobatics quickly spread to civilian pilots as an exciting and fun way to fly and has become an extremely visible part of aviation. Throughout the world, air shows are most people’s first introduction to general aviation. Many aerobatic pilots consider there to be three basic styles: “Gentleman’s” aerobatics, competition aerobatics, and air show aerobatics.

Aerobatic flight requires training and proficiency, especially with regards to spin recovery and unusual attitude recovery, before pilots should attempt it solo. It also requires an airplane that is built to withstand the G-loading and torsional stresses of the figures that are being flown. A conservative attitude towards aerobatics is the only reasonable way to embark on this portion of your flying journey.

Gentleman’s aerobatics is usually described as smooth aerobatics flight that is graceful and simple in construction of figures and usually is performed with relatively light, and almost always positive, G-Loading. This is the style of aerobatics that one would fly to give an enjoyable ride to a friend or relative. Many pilots with “aerobatic airplanes” like the Stearman, Citabria, or a Taylorcraft will introduce friends to aviation with a flight that includes a loop, roll, Hammerhead, and a Cuban 8.

Competition aerobatics is a very popular worldwide motorsport that provides pilots a venue to refine their flying throughout a wide range of skill levels. There are five categories to choose from as a competitor: Primary, Sportsman, Intermediate, Advanced, and Unlimited. Both the Advanced and Unlimited categories have a world championship competition that is held every other year. Competition aerobatics is a very structured environment, and therefore a great way to learn aerobatics, that focuses on precision execution of pre-defined aerobatic figures. Much like figure skating, a competitor will fly three programs: a Known or compulsory flight, a Freestyle flight which a competitor gets to design their own sequence, and an Unknown sequence which is provided to the competitor at the contest.

Air shows are the most visible form of aerobatic flight. They are all about smoke trails and lots of engine and prop noise with the primary goal of entertaining and inspiring the family audiences that are attending the event. Air show organizers put together the most diverse set of flying acts that they can ranging from the Cub comedy act, the biplane acts and the extreme flying of the high-tech monoplane, to the awesome power of a military jet team and the amazing maneuverability of the F-22. According to many sources air shows rank 2nd in spectator sport attendance figures in the US every year.

There are many on-line resources to help pilots learn and improve their aerobatic skills. The International Aerobatic Club (a division of the EAA) web site at www.iac.org is an excellent place to find information on getting started and where to find aerobatic instruction as well.